The Students’ union is students’ organization in a university or college which provides welfare services and represents students’ political interest. This year also student union of St.Vincent Pallotti College has been formed as per the guidelines led down by Pt.Ravishankar Shukla University. The Students have been elected on merit basis.

The following shall be the office bearers of the student council: 1. President 2. Vice President 3. Secretary 4. Joint Secretary.

Special guest Shri Amitesh Bhatdwaj,Parshad,Kalimata ward,Raipur,in his speech spoke about contribution of the college towards the society and also ensured that as a Parshad he will always contribute his services in college development.

Chief guest Shri Aijaz Dhebar, Mayor, Raipur Nagar Nigam, in his motivational speech congratulated the elected Office Bearers & Class Representatives and advised them to take up their duties sincerely, faithfully and with full commitment. He highlighted the value of each single student, and said that they should uphold the values of the college and discharge their duties with utmost sincerity. 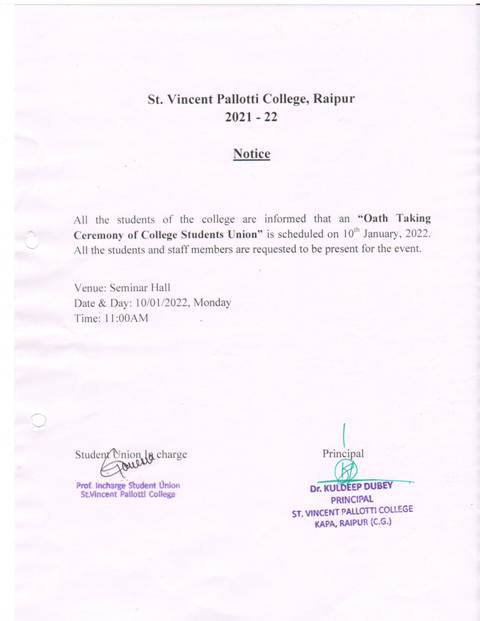 We use a holistic, science-based approach combining training, consulting, coaching, and diagnostics to help you get the results you want.